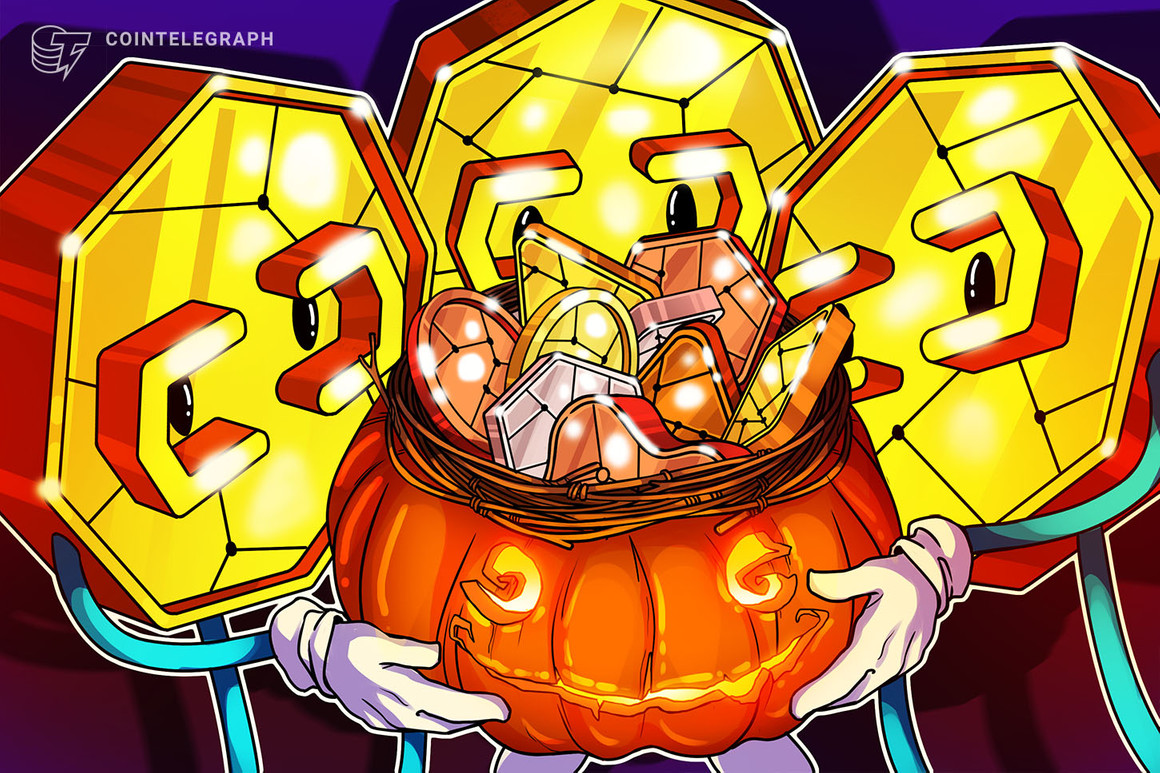 Halloween is traditionally known for costumes, candy and trick or treating, but this year, the holiday is transitioning to the virtual world as the metaverse unfolds. As such, nonfungible tokens, or NFTs, are being created to showcase Halloween themes in hopes of attracting collectors looking for themed drops.

Although Halloween-inspired NFTs appear to be a new concept, NFT artist Etsploit told Cointelegraph that Halloween holds a certain cultural importance that can’t be dismissed: “I think people will collect NFTs for Halloween similar to that of NFT limited editions or releases of anything else.”

Given this sentiment, Etsploit launched the “Mango Heroes” project, which is a series of NFTs built on the Solana blockchain and inspired by the decentralized trading platform Mango Markets. Etsploit noted that 7,000 “Mango Heroes” will be available on Oct. 31, along with a special edition Halloween portion of the collection. “We will be giving away a Mango Hero reminiscent of Jason from the Halloween Movie series to a member of our Mango Heroes discord who has contributed the most to growing our community,” said Etsploit.

In addition to Mango Heroes, an NFT series created by NFTignition known as “Monster Bash” has launched just in time for Halloween 2021. Danielle Davis, founder of NFTignition, told Cointelegraph that the Monsters Bash collection features 10,000 NFTs based on classic monsters living on the Ethereum blockchain: “The collection features a series of generative art pieces that come in both a human and monster form. Your “hooman” state will transform into a monster before your very eyes.”

Davis shared that the goal behind Monster Bash is to pay homage to classic movie monsters such as vampires, mummies and werewolves. Like most NFT projects that appeal to collectors seeking specific themes, Davis explained that the Monster Bash selection aims to spark nostalgia in people upon viewing these creations.

Shaw shared that Imperium token will kick off the launch with a limited release of 666 NFTs of the uncanny primates: “The Halloween Edition apes have a total of 25 different possible traits with five different categories (backgrounds, head attire, hairstyle, eyewear and facial expressions).”

While killer mangoes, transforming monsters and colorful apes are being launched by the crypto community, some celebrities and major brands have also created Halloween-inspired digital collectibles.

For example, American businesswoman and television personality Martha Stewart released a Halloween series of NFTs this month that are currently on display on Fresh Mint — Stewart’s own NFT website. According to sources, one of Stewart’s NFT collections features several of the Halloween costumes that the eclectic T.V. host has worn over the years. Others showcase a Roy Lichtenstein painting, a “black widow” and a “ghostly equestrienne.” Some of Stewart’s featured NFT drops also include work from the Brooklyn-based collective “Maniac Pumpkin Carvers.”

Staying true to the vast Martha Stewart brand, it’s also been noted that customers interested in these NFTs can bid on offerings like the “Custom Carved Pumpkin,” while also requesting specific designs to be created that are not NFTs. On Oct. 19, Stewart stated in an Instagram post that this is the first of many NFT collections she plans to release.

If Martha Stewart’s NFT collection wasn’t shockingly horrifying enough, it may come as a surprise that Spirit Halloween — North America’s largest Halloween retailer — is also showcasing an NFT collection this year. Spirit Halloween recently announced a partnership with Upland, a blockchain-based metaverse, that would allow the retailer to feature some of their most iconic costumes like Jack the Ripper within Upland’s virtual world.

Celebrating Halloween in the metaverse with NFTs

According to Dirk Lueth, co-founder of Upland, Legits incorporate 3D designs that are optimized for a mobile experience. Lueth added that these new NFTs will offer an added layer of gamification that “die-hard Spirit Halloween fans will want to collect, trade and showcase, including an increased level of interactivity.”

Decentraland, another blockchain-based metaverse, is also celebrating Halloween with NFTs by partnering with BEAR NFT and a number of other organizations to produce a Metaverse event called “NFTs are Dead.” The virtual gathering is scheduled to take place on Oct. 31 and will act as Decentraland’s official Halloween party and concert.

Ryan Kieffer, event producer and co-founder of BEAR NFT, told Cointelegraph that NFTs will play a large role, given that Decentraland’s virtual land is a nonfungible token. Kieffer added that NFT wearables will be airdropped to users during the event:

“Guests are invited to wear their best costume for photo opportunities, a costume contest and other fun surprises. Attendees should also keep a look out for a secret special VIP guest who will be wearing a 1/1 wearable and will reveal himself for those who stick around for the party’s grand finale.”

According to Kieffer, the purpose of such an event is to bring people together in the metaverse, which seems to be an ongoing theme post-COVID-19. In addition to virtual Halloween gatherings, Davis remarked that Monster Bash collectors are able to earn passive income through in-game tournaments. “There will be a pit against other monsters, with one reigning supreme each time! Each of the monsters has their own traits, allowing them to be better at some contests than others,” explained Davis.

Interestingly enough, virtual games leveraging NFTs may be one of the best applications for holiday-themed nonfungibles. Recent data from ​​the Worldwide Asset eXchange found that significant NFT growth has been driven by a surge in gaming activity, noting that over $1 million in NFT trading was generated on the platform just during the last month.

Will Halloween NFTs be a trick or an ongoing treat?

While Halloween-themed NFTs certainly seem to be in abundance this year, some may wonder if this will be an ongoing trend or just another opportunity to jump on board the NFT hype train while it’s hot.

Although it’s hard to predict the future of crypto, Kieffer believes that there is space for more Halloween-centric NFT releases, especially with wearables that can be used as costumes. To Kieffer’s point, a number of luxury fashion brands have also launched NFT collections to be worn virtually as the concept gains traction.

Echoing Kieffer, Etsploit commented that Halloween-themed NFTs could indeed gain traction after a few years “I think currently though, most people are looking for what is going to be the next long-term blue-chip project,” he noted. Shaw further remarked that the Halloween edition of Uncanny Ape may be too specific for the overall market, yet he believes that the primary line of Uncanny Apes will spark collector interest.

Davis further commented that although the Monster Bash collection was launched during the days leading up to Halloween, the collection isn’t specifically a Halloween project:

“We believe monsters are for every holiday, they are year-round spooky friends! Just because Halloween ends, that doesn’t mean the functionality stops or the art gets worse. We think that though there will be an obvious holiday-specific correlation in the market, that won’t stop our community from existing and growing.”