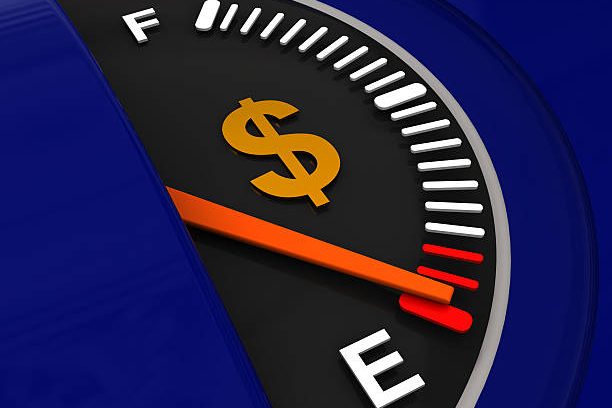 Dollar is recovering in early US session, follow another print of strong consumer inflation. 10-year yield is also back above 2.7% handle. Still, the greenback is the worst performer for the week together with Euro. Yen is retreating mildly but stays the strongest one for the week, followed by Sterling. Commodity currencies are mixed, slightly on the soft side. 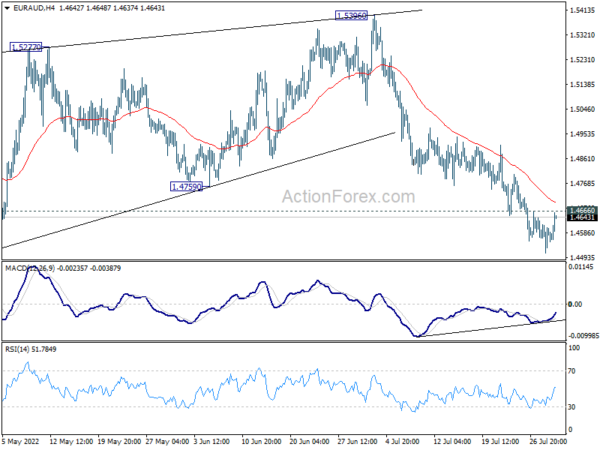 Canada GDP unchanged in May, grew 0.1% mom in Jun

Advance information indicates that GDP grew 0.1% mom in June, as output was up in the construction, manufacturing, and accommodation and food services sectors. Also, GDP grew 1.1% qoq in Q2.

Swiss KOF dropped to 90.1, economy to develop sluggishly in Autumn

Swiss KOF Economic Barometer dropped sharply from 95.2 to 90.1 in July, well below expectation of 95.2. That’s also the third decline in a row, with the value below its long-term average by almost 10 pts. KOF said the Swiss economy is likely to “develop sluggishly in autumn”.

In the Summary of Opinions at BoJ’s July 20 and 21 meeting, it’s noted that, “Bank should support financing, mainly of firms, and maintain stability in financial markets, and should not hesitate to take additional easing measures if necessary.” Additionally, it is “appropriate for the Bank to maintain the current forward guidance for the policy rates.”

“While Japan’s economy is on its way to recovery from the pandemic, it has been under downward pressure due to an outflow of income from Japan caused by high commodity prices,” one member noted. “In this situation, it is appropriate that the Bank encourage wage increases through monetary easing, aiming to achieve the price stability target in a sustainable and stable manner”.

Japan industrial production rose strongly by 8.9% mom in June, well above expectation of 3.7% mom. That’s also the biggest monthly rise since data become available in 2013. Car production jumped 14.0% mom thanks to easing of lockdowns in Shanghai of China. Manufacturers surveyed by the Ministry of Economy, Trade and Industry (METI) expected output to extend its recovery by 3.8% in July and 6.0% in August.

Intraday bias in EUR/USD remains neutral and outlook is unchanged. On the upside, above 1.0277 minor resistance will target 1.0348 resistance first. Break there will target channel resistance at 1.0469. on the downside, break of 1.0095 minor support will bring retest of 0.9951 low instead. 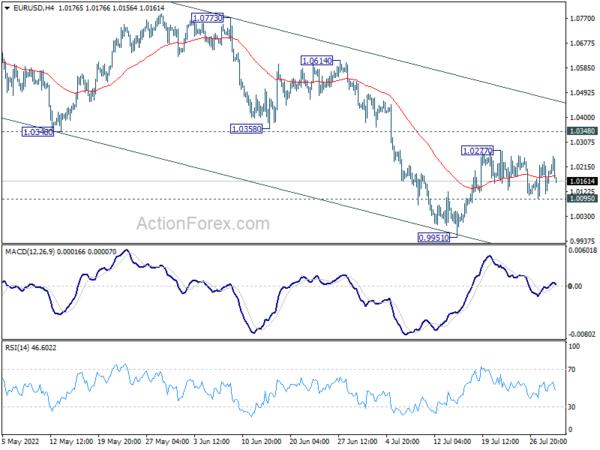 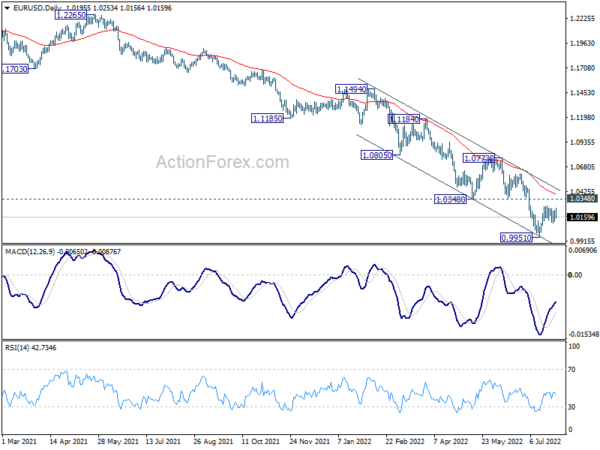 My Forex Strategy Explained – (LEARN THIS AND MASTER TRADING)
EURGBP keeps a lid on the pair against its 100 day MA
EURUSD leak to the downside continues as stocks trade to new lows/yields higher
GBP/JPY sees downside below 162.00 on lower consensus for UK GDP
Swiss Franc Rises in Very Quiet Markets Euro and Sterling on the Soft Side